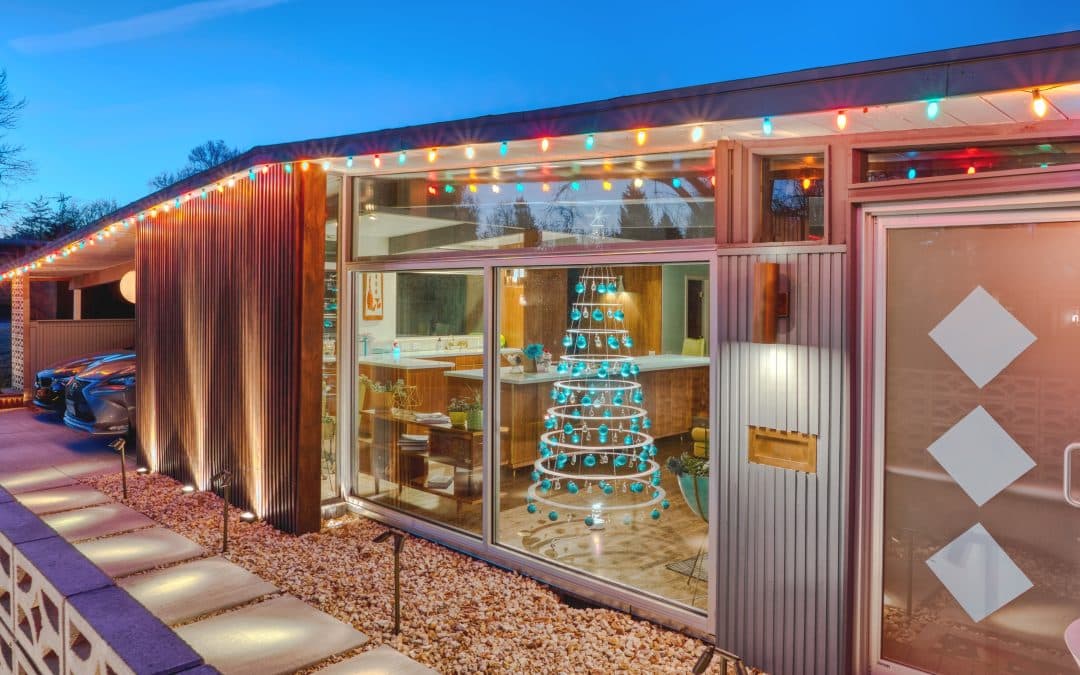 When so many young families were moving to Harvey Park back in the mid-1950s, they could not have imagined that 60 years later, a whole new generation of people would be clamoring to live in the same houses that they had just moved into. A lot has happened in those 60 years, both to the neighborhood itself: ideas have changed, politics have changed, fashion has changed, and the makeup of the neighborhood has changed. Through all of that change, one thing that has not changed are the houses that were built here. Particularly special among those houses are the “mid-century modern” (MCM) or “contemporary” houses that were built by builders Frank Burns and Lou Carey, among others.

The two largest enclaves in the neighborhood were designed by architects (a rarity, even in the ’50s), the “Cliff May Homes” at Lowell & Yale designed by Cliff May and Chris Choate of California, and the Carey “Holiday Homes” at Raleigh & Iliff and Evans & Vrain, designed by local architecture firm Baume & Polivnik, who were best known for designing Public Service Company’s corporate headquarters downtown in the 1960s. This architect involvement is just one part of a series of qualities that set these houses apart then, and on into the 21st century.

Chief among them: both enclaves represent a great risk taken by the builders to develop an entire tract of houses in a contemporary style. Most builders in the ‘50s would offer a contemporary model or two among a set of more traditional offerings. By being willing to take this risk, both Burns and Carey built something unique and rare, not only in Denver, but nationwide. Because of their rarity, well-preserved neighborhoods of MCM houses have become treasured places among fans of modern architecture, and buyers who are looking to live in a neighborhood of MCM style, with a community of like-minded enthusiasts.

People’s enthusiasm for MCM homes is a reflection of the big ideas behind these houses. The modern architects of the time believed that by focusing less on the style of the architecture and more on ideas of form, space, and order, that they could improve life for everyone. Advertising for the Holiday Homes boasts of houses that are “less formal, more recreational . . . more functional . . . making living a freer, happier, experience . . .” while Cliff May Homes are described as “a home planned to give the whole family a wonderful opportunity to l-i-v-e!” In both cases, the builders forgo discussing style and features, and instead talk about how these houses were designed to materially improve the lives of those who live in them.

They really did deliver . . . and this is why they are so much in demand today. I have a number of prospective buyers contacting me every week wanting to move into MCM houses, and what they are looking for are the specific qualities that are only found in MCM houses like the Cliff May Homes and Carey Hoiday Homes: informal living, a blurred connection between indoor and outdoor living spaces (fences that surround the Cliff May Homes are meant to be like outdoor living rooms), ample natural light, high ceilings, low-slung roofs to maximize natural light and to minimize the impact of the houses on the street, and a feeling that the house was designed to improve the human experience.

These buyers also want to be part of something special; to find well-preserved enclaves of MCM houses like these is truly a rare opportunity anywhere, and buyers are willing to pay a premium to be part of this community; which is why I am thrilled to see sale-after-sale of MCM houses in Harvey Park continue to break records, and break a decades-long cycle of being undervalued for their unique architecture. The residents of Harvey Park’s mid-century modern houses are proud of what they are a part of, and I am proud to represent them when it comes time for them to sell their homes.