The Modern Christmas Tree® was originally designed by Lawrence “Bud” Stoecker in the mid-1960’s. It’s a holiday tree made or concentric acrylic rings, decorated with chandelier crystals and ornaments. The tree hangs from the ceiling and is illuminated by a spotlight from underneath. This projects its breathtaking shadows and reflections throughout the room.

In 2010, Stoecker was diagnosed with Alzheimer’s. This is when his grandson Matt Bliss decided to show the world his trees. Sadly, he passed away on September 26th, 2012. “It makes me happy showing his tree to people and telling the story behind it,” says Bliss.

The trees are displayed during the holidays throughout the world, including at the Disneyland Hotel and Google’s corporate offices. The Sleeper House is the most recent venue to show these modern art holiday wonders.

Designed by the late great Charles Deaton in 1963, the originally coined “Sculptured House” is located in Genesee, Colorado. The house was made famous in 1973 with the release of the sci-fi/comedy “Sleeper” which was written, directed and starred Woody Allen. Since then, the iconic home has been known as “The Sleeper House” and adored by millions who have seen the house atop Genesee Mountain from interstate 70. 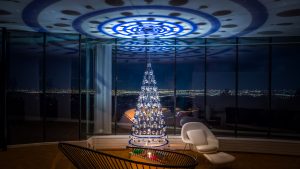 CHARLES DEATON, Sculpture in Architecture Charles Deaton. Not exactly a household name. Who was Charles Deaton? Charles Deaton was born Charles Utter Deaton in Clayton, New Mexico on the first day of January, 1921. Charles’ father was an oil geologist. Early in Charles’ life the family moved to the Oklahoma plains where they literally lived in tent for about 2 years while his father worked finding wells in the Oklahoma oil fields.

Charles was a creative lad and by the age of 16, he had established himself as a commercial artist. At 19, he designed and patented a board game called “Gusher”. Gusher was a monopoly style game with an oil wildcatting theme. Basically, each player would attempt to determine which “holes” were dry wells or gushers. The game was marketed by Carrom Industries from 1940 through the early 1960s. While inventing board games (Charles patented 3 different games), Deaton also studied structural engineering, industrial, and architectural design earning his architect certification. He began his architectural career in the 1940s.

Today, he is well known within the architectural arena for such designs as the Arrowhead Stadium and the Truman Complex in Kansas City built in 1972 and the 1959 Central Bank and Trust in downtown Denver. It was with the 1959 commission that Deaton broke the restraints of rectangular design. For those of us in Colorado, we are more familiar with Deaton’s expressionism found in the “Sculptured House” also known as the “Sleeper” house in Genesee built in 1963.

Probably the best known house in Colorado, the Sleeper name came from a 1972 Woody Allen film by the same name which featured Deaton’s creation. Charles designed and built the house in Genesee to be his home. Unfortunately, before the project was completed, Deaton ran out of funding and he was unable to realize living in his dream house which as he put it, “will sing its song to the beauty of the mountains”.

Closer to home, Deaton designed the Key Savings Bank also known as the “Flying Saucer” bank here in Englewood. The bank, which is now part of Community Banks of Colorado, replaced an old multi-story brick building on the corner of Broadway and Hampden in downtown Englewood. The building with its sculptured shell of 6½ inches of concrete was built by the Longfur Construction Corporation in 1965 and today also serves as home to the Englewood Chamber of Commerce. On June 3rd 2016, the National Park Service added the building to the National Register of Historic Places, History Colorado number 5AH.2290.

Later in his career, the Horatio Alger Association of Distinguished Americans honored Deaton by naming him to its membership. As a designer, architect, and inventor; Charles’ architectural prowess can be found in 36 states of the United States and Canada. In his lifetime Deaton held over 30 patents. Charles Deaton died at the age of 75 in 1996 at his home in Morrison, Colorado. ~ Dave Paschal